Let me warn you now, all you parents that still have your Saturdays.  When you sign your kid up for sports, you are also signing yourself up for snack duty.

This traditionally means running to Target to grab two containers of juice boxes and a dozen bags of Pirate's Booty.  And "Arrrrrgh!" is all I want to say when I see yet another suburban ritual that generates bags of needless waste.

So this season I thought I would try to cut back.  No Capri Suns, no snack size anything.  There'll still be plenty of sugar though.  Last year's black bean brownies received a few eyebrow raises and at least one "These taste funny."

So we went with orange slices, cupcakes and lemonade. 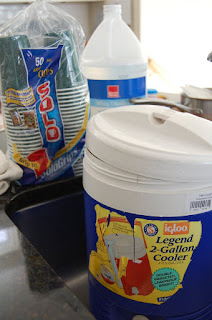 To keep the liquid requirement waste down, I used small Solo cups and a thermos I found at a thrift store.  If I hadn't found the cups, I would have brought a dozen plastic kid cups from home (and possibly would have had to borrow a few).

Lemonade was NOT homemade as two gallons of lemonade requires, what, a dozen and a half to two dozen lemons?  That puts me at $5 - $8 of citrus, plus sugar.  So we went with Country Time powdered mix in a HDPE 2 recyclable container.

Cupcakes were also from a mix.  I bake from scratch, I bake from box, and both result in some form of waste.  Today, we went with Pillsbury, $1.50 Funfetti cake mix - the waste (not counting what ever happens at the plant) was that plastic bag inside the box- you know the one you try to open by hand for two minutes before you relent and look for the scissors? 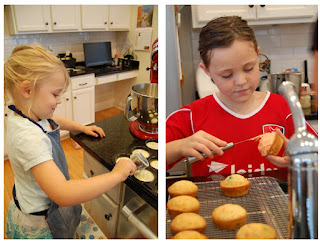 Four quarters later and we set up our little lemonade stand...and, it went alright!  There may have been some grumbling, but the girls were sweet enough to wait until I was out of earshot. 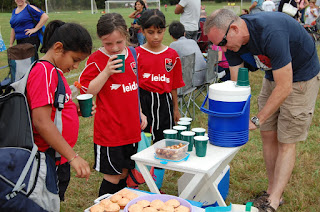 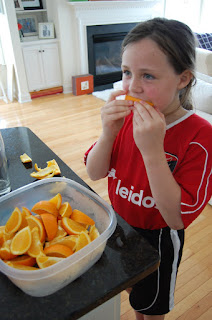 One small hiccup:  we forgot the oranges.  I had some pretzels on hand that we used but nothing is as satisfying as orange slices after a good hour of running.  Just ask my daughter who pounded seven of these when we got home.

If you use recyclable materials, like the cups we used today, stick around to grab them when your little athletes are finished so you can recycle them at home.

Also, it helps to solicit opinions from your child that is on the team.  I didn't bring on my hippy full force without consulting my daughter, who will continue to play with these girls for the next few seasons.  We discussed different options and settled on a nice compromise that removed some of the waste, but clearly none of the sugar.

**Props to Coach Shelia, by the way.  After the game she says, "You know, these kids are getting too old for the snacks.  I think I'm gonna cut it off after this season."  Hear, hear!!**