More often than not, when my father visits for Thanksgiving, he'll volunteer to clean up the kitchen after the big meal.  He's gotten over the fact that we are a (mostly) Paperless Kitchen, but can't forgive us for not having a proper sponge to scrub the dirty pans with.  And truth be told, we still don't agree on which tool to park near the dish soap.  It should have been on the premarital questionnaire:

Kids or no kids?
City or suburbs?
SUV or Civic?
Sponge or dishrag?


The hubs hates the dishrag because, let’s face it, they’re nasty.  But so are sponges and they are disposable and so is the packaging they come in.  So began my quest to finally put this disagreement behind us.

First, to the streets.  What I found in town really disappointed me:

All biodegradable or made from recycled material.  But all wrapped in plastic!

Across town (I know...I've already lost the Zero Waste objective here, haven't I?), I found these: 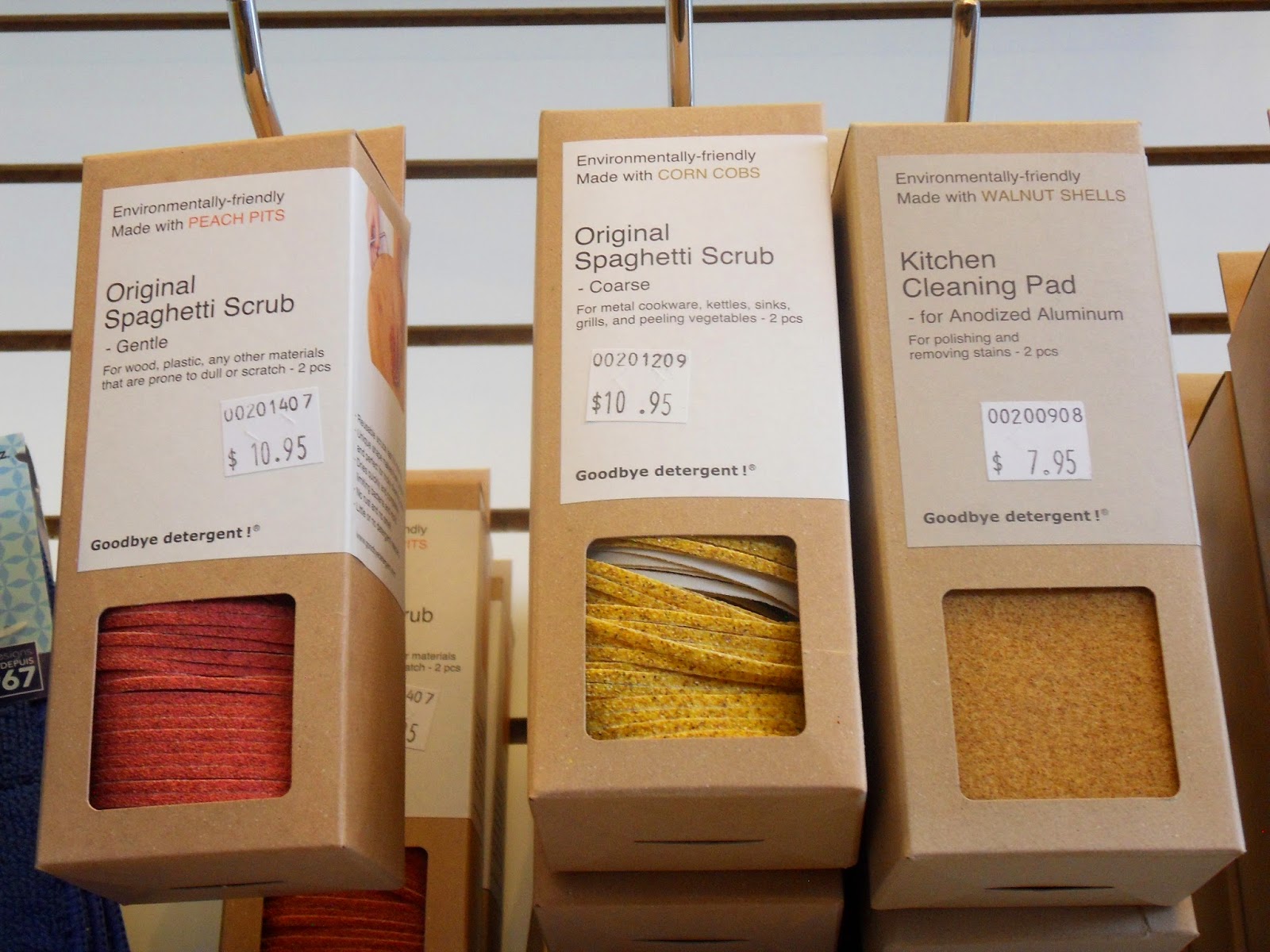 Expensive but great packaging, available, and made from stuff like corn cobs and peach pits.  I ultimately turned it down because I can't use it on my non-stick pan.

So to the interwebs we go.

This guy is pretty cool.  According to one seller the handle is made from sustainable wood and the bristles from a type of palm (also sustainably harvested).  And you can remove the head, toss it in the composter, and get a replacement.  I like that.

Some concerns, though.  The wood will eventually fall apart because we're soaking it in water all day, non?  And no composter in Albuquerque is going to break down those heads anytime soon.  And despite the advertising, this guy won't be good at getting into crevices or cups.  You need a rag or sponge or something malleable for that.

This one looks pretty, also made with renewable or sustainably-grown wood, but the reviews were unfavorable (bristles kept falling out.  And again, it's wood, so it'll crack if not maintained).

How about these copper sponges made from "100% recyclable copper"?

Really?!  I called the metal scrap guys (actually it was a chick!  My apologies to the female gender...) in town and they said, "Sure!  We'll take it."  According to the reviews they do last longer than a normal sponge and that's great since they are so expensive.

But what about the bacteria commune you're hosting up there on your sink?  You can't exactly put the wood scrubbers in the dishwasher or microwave the copper sponge (think JLaw in American Hustle).  And I'm hesitant to use any of these on my "ridiculously-expensive but it's-okay-because it's-eco-friendly non-Teflon Teflon" pans.

AND, these products do come in recyclable packaging, but if you order it from Amazon, they'll surely send it along with some bubble wrap.        A sponge.        With protective packaging.*

So that brings us to dishrags.  Dishrags can be tossed in the laundry and I like that.  Use it for a few days before it starts to smell (or WHEN it starts to smell) and throw it and your dishcloths into the hot wash.

Don't do what I did if you want to win the sponge vs. dishrag argument - quarter an old dishcloth without sewing up the ends.  It'll disintegrate by the end of the month and you will have lost the argument a fortnight before that.


These cloths here are a little sturdier than a dishcloth, but more pliable than a sponge.  You can wash them in the laundry and (theoretically) they are compostable once you are done with them years down the road.  But at 7x8", they are a little big.

Wait now.  What are these pretty things?

Attractive.  Eco-made.  Compostable.  Washable.  The same website says they are made in both Sweden AND Finland but I'll overlook the discrepancy because everything from Europe is better, right?  The are still on the large side for a dishrag, but there's no turning back now.  Mommy like.  Sorry Daddy...

Now dishrags don't scrub that well.  So I'm still in for an ear-full from my father on Turkey Day.  I'll have to introduce him to the Baking-Soda Sit-and-Wait-it-Out method.

So, this is a little hippie, but I've got this stroller blanket I knitted for my oldest sometime ago.  Now that we've rounded the corner on my last winter with a kid in a stroller, maybe I could use some of that yarn to make little scrubbers?

*I did call Amazon about this and talked to a nice gentleman named Steve who said there was room for growth in this department and that it made sense to him to have a "non-plastic packaging" option at checkout, just like you do at the grocery store and that he was going to note my concern in the virtual suggestion box.  So that was an unexpected warm and fuzzy provided by a megacorp.